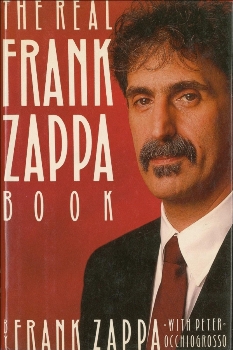 The Real Frank Zappa Book is Frank Zappa's autobiography, published in 1989. Originally journalist Peter Occhiogrosso was invited to transcribe Zappa's actual words to paper, but when Zappa read the first draft he felt it was way too serious and dry. So he changed the entire style of the book in something that was more in line with his reputation for funny, sarcastic and bizarre entertainment. The end result is an amusing and insightful book that combines both autobiographical information, transcripts of song lyrics and letters, a transcript of the court case against Zappa by the Royal Albert Hall because of obscenity, touring anecdotes, and Zappa's personal opinions about various topics, including music, politics, education, religion, censorship, family and his own career.