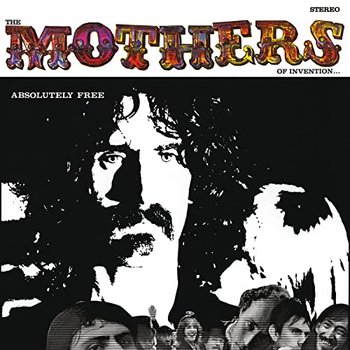 Absolutely Free, released in 1967, is the second album by Frank Zappa and his group The Mothers of Invention. Following the debut album Freak Out! from the previous year, Absolutely marked a more extravagant display of Zappa's innovation and boldness in seeking to debunk mores of hippies and straights alike. The original album consisted of a series of two "Underground Oratorios", the first side giving you "Absolutely Free" and the second side giving you "The M.O.I. American Pageant"; all later compact disc reissues include, sandwiched between the oratorios, the bonus tracks "Big Leg Emma" and "Why Don'tcha Do Me Right?" The contributing Mothers as credited on Absolutely Free had lost guitarist Eliott Ingber, and gained Euclid James "Motorhead" Sherwood, Don Preston, Bunk Gardner, and Billy Mundi. Early printed editions of the complete libretto, distributed separately from the album owing to Verve's doubt of lyrics such as "I'd like to make her do a nasty on the White House lawn" (from "Brown Shoes Don't Make It"), were bowdlerized.

The album is best remembered for "Plastic People", which became a freedom anthem in Czechoslovakia under the Iron Curtain as Czech President Vaclav Havél told Zappa in 1989, "Duke of Prunes", "Call Any Vegetable" and "Brown Shoes Don't Make It".

This album, and the suite which lends it its name on side one, should not be confused with the identically named song from We're Only in It for the Money, which is a completely different song. CD reissues of the album place a single from 1967 in between the first and second LP sides.