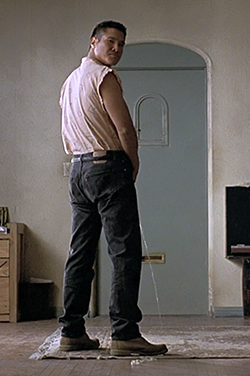 "It really tied the room together!"
"While you are imitating Al Capone, I'll be Nina Simone and defecating on your microphone."
— Lauryn Hill, "Ready or Not"
Advertisement:

The acts of urinating or defecating on something (or more likely, someone) to make a point or show disrespect. To some individuals, and possibly some cultures, it is not a big deal but to most, these are considered the greatest of insults. With animals, it may in fact be a way of marking property.

Compare: Spiteful Spit, Fartillery, and Dung Fu. When done on a deceased person's casket or grave it becomes Last Disrespects. See also Potty Failure in which someone excretes on something but usually isn't disrespecting on purpose. Contrast: Bring My Brown Pants.

Also, the name of this trope has nothing to do with Oh, Crap!.

The Toxic Avenger Part III: The Last Temptation of Toxie

Satan attacks Toxie with fire. So Toxie attacks with water. Kind of.

The Toxic Avenger Part III: The Last Temptation of Toxie

Satan attacks Toxie with fire. So Toxie attacks with water. Kind of.