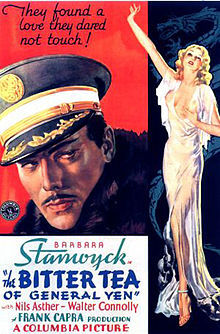 Forbidden love at its finest.
"There isn’t a General Yen or Megan Davis, but just you and me."
Advertisement:

An early Frank Capra effort made during The Pre-Code Era, The Bitter Tea of General Yen (1933) is a dramatic film following naïve missionary, Megan Davis (Barbara Stanwyck), as she is thrown into the midst of the Chinese Civil War.

After being hit unconscious, Davis finds herself in the hands of General Yen (Nils Asther), an interesting man from a different world — or so Megan thinks. The film explores Davis’ contradicting feelings; she is aroused and confused by this seemingly cruel man. Of course, her inherent prejudices stop her from daring to realize her love, and her naiveté proves to be folly, especially when it comes to her feelings towards Mah-Li (Toshia Mori), the servant to General Yen.

Yes, a film from 1933 explores racism, sexual awakening, and doesn’t present a caricature of a Chinese man (at least for its time, it shows an Asian man who isn’t used for comedic purposes or a cartoonish villain).

Unfortunately, a Swedish actor in yellow face plays General Yen. It's important to note that this film is a product of its time; it's not perfect, but it goes where almost no films of that time, or even now,

Tropes found in this work are as follows: