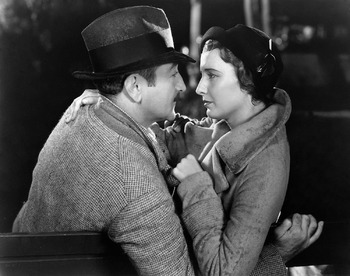 Forbidden is a 1932 melodrama film directed by Frank Capra, based on the novel Back Street by Fannie Hurst.

Lulu Smith (Barbara Stanwyck) is a frumpy librarian in a small town. She gets bored with being a frumpy librarian, so she blows her savings—over $1600 in 1932 money, so, quite a bit—on a lavish cruise to Havana. For a while she doesn't meet anybody, until one night a fellow named Bob (Adolphe Menjou) wanders into her cabin by mistake after drinking way too much at dinner. Bob, it turns out, is a successful lawyer. They hit it off immediately, falling into a whirlwind romance.

Either they live in the same town or she follows him, because back on land they are still dating, as Bob mulls a run for district attorney. Lulu gets a job at a newspaper and draws the romantic attentions of the editor, Al Holland (Ralph Bellamy), but she only has eyes for Bob. So she's pretty unpleasantly surprised one night when Bob confesses that he is married, and can't divorce his wife, as she has serious health issues. Lulu breaks up with him... and does not tell him that she is pregnant.