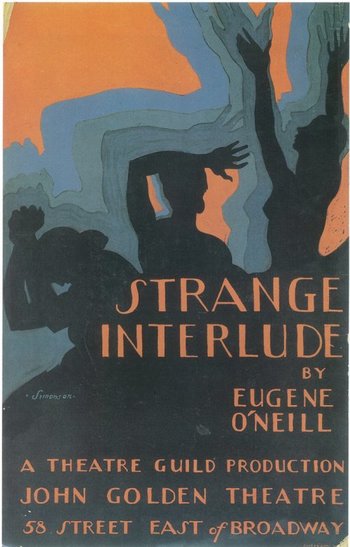 Strange Interlude is a 1932 play by Eugene O'Neill.

Nina Leeds is the daughter of a college professor in the years immediately following The Great War. Her great regret is not marrying, or at least bonking, her beloved fiance Gordon, before he went off to France and was killed in action. Unable to get past her lost love, she decides to become a nurse to wounded veterans, and to have sex with as many of them as she possibly can.

Eventually Nina, utterly unaware of the fact that her father's old friend Charles Marsden loves and adores her, marries an amiable dunce named Sam Evans. Nina gets pregnant by Sam but then finds out that insanity runs in Sam's family. So she aborts the baby and instead gets pregnant by family friend Dr Edmund "Ned" Darrell, and in the process, falls in love with him.

The Other Wiki calls Strange Interlude "an experimental play". For starters, it is very long, extending for nine acts. Additionally, in this play the characters actually verbalize their internal thoughts to the audience, with their inner monologue taking up more of the running time than the dialogue between characters. In some productions the actors hold up masks when delivering their dialogue to other characters, to make clear the distinction between spoken dialogue and inner monologue.

Strange Interlude was adapted into a 1932 film starring Norma Shearer and Clark Gable.