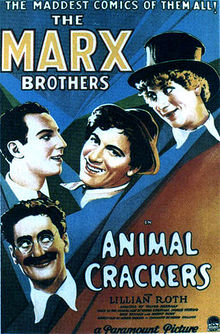 The One With… a party in honor of an explorer whose pajamas an elephant managed to get into... somehow.

Animal Crackers is a musical comedy that originally starred the four Marx Brothers: Groucho, Harpo, Chico, and Zeppo. Originally a 1928 Broadway show, written by George S. Kaufman and Morrie Ryskind, with songs by Bert Kalmar and Harry Ruby, the movie version, filmed in Astoria, Queens, New York, was released on August 23, 1930. The stage show has occasionally been revived by theatrical companies.

The basic plot concerns explorer Captain Jeffrey T. Spaulding (Groucho), attending a party in his honor at the estate of society matron Mrs. Rittenhouse, and investigating the theft of a valuable painting during the party. The bulk of the movie consists of a succession of comedy sketches, one liner jokes and visual gags.

In the 1990s, a 15-second clip filmed in Multicolor during the rehearsal of a scene in Animal Crackers was found and aired as a part of the AMC documentary Glorious Technicolor (1998). The clip is significant because it is the only known color footage of the Marx Brothers together.

Not to be confused with the long-running newspaper comic strip and animated show, or the 2017 animated movie released on Netflix with the same name.