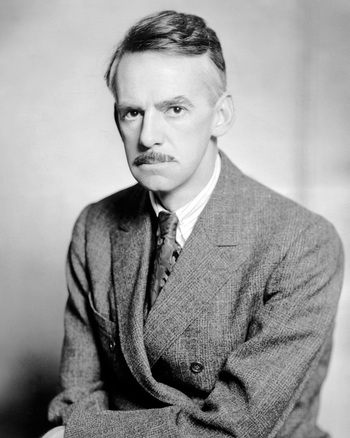 "We need above all to learn again to believe in the possibility of nobility of spirit in ourselves."
Advertisement:

Appropriately enough, O'Neill was literally born on Broadway, the child of Irish immigrants, his father an actor. He went to boarding school and then to Princeton but he dropped out of college after a year, one story holding that he was kicked out for throwing a bottle in Professor Woodrow Wilson's window. O'Neill then worked as a merchant sailor, where the alcoholism and depression that made his plays so cheerful first developed.

His life got even more cheerful after he contracted tuberculosis, which led him to leave the merchant sailor life and embark on a literary career. His first published play, Beyond the Horizon, won the Pulitzer Prize and immediately made him famous in the theater world. He won the Pulitzer Prize four times in his career, including posthumously for Long Day's Journey Into Night, a play that O'Neill insisted not be staged until after his death due to its highly autobiographical story. He also won the Nobel Prize in Literature.

O'Neill's personal life was just as depressing as his plays. His brother drank himself to death. His second wife became a drug addict. His oldest son was an alcoholic who killed himself in 1950. His younger son was a heroin addict who killed himself in 1977. And he disowned his only daughter Oona O'Neill after 18-year-old Oona married 54-year-old Charlie Chaplin, a man almost Eugene's own age, in 1943.

His great-granddaughter is actress Oona Chaplin. O'Neill is a character in the 1981 film Reds, where he's portrayed by Jack Nicholson.

Eugene O'Neill plays on the wiki:

Other works by Eugene O'Neill contains examples of: