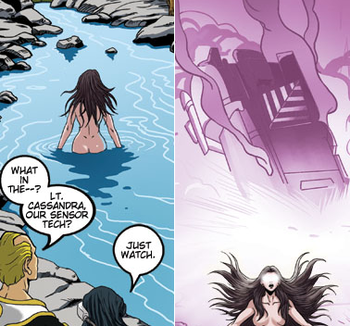 "It's a skinny divining pool."
There's more than one way for oracles to divine the future, and this one involves bath salts.note The fragrant, relaxing kind; not the drug. Although...
Advertisement:

The Dehydrated Oracle immerses herself nearly or completely in water, and through contact with the liquid is gifted with visions of the future. Why water? Perhaps because of its mystic connotations as the element of change, associations with dreams, the subconscious, and the primordial. Perhaps the reflective surface of the water will be used like a Magic Mirror. Perhaps because it is reminiscent of a sensory deprivation tank... or because a busty, dripping wet oracle is sure to appeal to some. Back in the day, Greek oracles huffed volcanic fumes to get visions. The bathtub thing is probably there to help differentiate her from "normal" tarot-reading mystics, this also keeps you focused on her head and face rather than her boo— *ahem* crystal orbs.

Whatever the case, this well-moisturized sister to the Waif Prophet, Oracular Urchin, and Blind Seer plies her trade while lying in a pool of water. Prophet Eyes and seizures involving flopping like a landed fish can be expected.