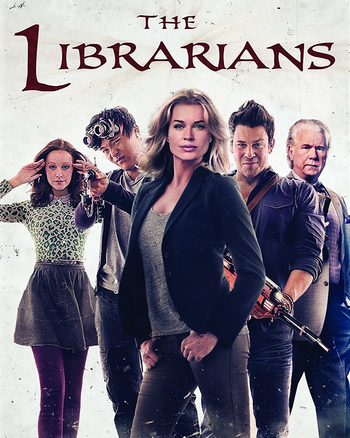 Filing evil under 'history'
I’m offering you a life of mystery, of misery, of loneliness, and adventure. More than that, I’m offering you the opportunity to make a difference and to save the world every week. Twice before Friday. Are you in?
Advertisement:

The Librarians is a TNT series that acts as a continuation of The Librarian films. In addition to the return of Noah Wyle (albeit only in a recurring role), Bob Newhart, and Jane Curtin in the first episode, there are four new characters who are recruited to work for the Library, headed by Eve Baird (Rebecca Romijn). Together, they Save the World every week. Twice before Friday.

A different series from the Australian sitcom of the same name.

The Librarians provides examples of: