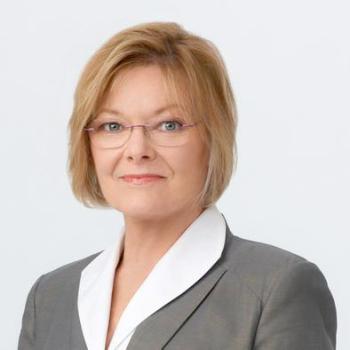 Jane Therese Curtin (born September 6, 1947 in Cambridge, Massachusetts) is an American comedian and actress, best known as one of the original cast members on Saturday Night Live in The '70s.

She was one of only three female cast members SNL had at the time, joining Laraine Newman and Gilda Radner. Curtin was the more sane, level-headed one (both onscreen and off, as she never joined in the drug- and sex-fueled antics that happened backstage during her time on the show) and chafed under the fact that the male cast members were getting more screentime than the female ones. Despite this, Curtin made a name for herself as the show's first female Weekend Update anchor (and, as of 2020, is the only female solo anchor)...until she was paired with Dan Aykroyd (where she became the Phrase Catcher for the line, "Jane, you ignorant slut!

"note This was directed at her by Dan Aykroyd during the "Point/Counterpoint" debates on Weekend Update, as a parody of Ad Hominem attacks. Her reply was, "Dan, you pompous ass!" ) and, later, Bill Murray.

She later starred as Allie Lowell on Kate & Allie (a role for which she won two Emmy Awards) and Dr. Mary Albright on 3rd Rock from the Sun. Most of her work is in comedy and she tends to specialize in characters who are Comically Serious, leading to her nickname "Queen of Deadpan".