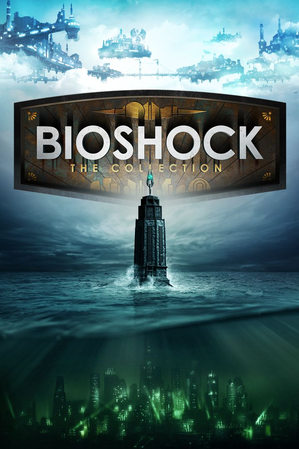 BioShock is a video game series developed by Irrational Games (also known as 2K Boston for a short while before reverting back to the old name). The series acts as a Spiritual Successor to the System Shock games, and as such are technically First Person Shooters with Stat Grinding and Survival Horror elements. Players primarily fight with guns, but they also have access to a range of element-themed mutant abilities.

BioShock games take place in alternative history realities built heavily on Bio Punk and Diesel Punk. As with System Shock, plots unfold in a Soiled City on a Hill, now under the control of a lunatic with a God complex. The general backstories of the cities and characters are elaborated on in Apocalyptic Logs scattered about. The games delve deep into heavy ethical and philosophical themes: the first two games (as well as their DLC and the DLC of the third game), set in the underwater city of Rapture, meditate on the ethics of gene editing, Objectivism versus Collectivism and the dangers of extreme ideologies, especially when combined with hypocrisy and the natural tendency to compromise our values in the pursuit of power.

The third game, Infinite, wrestles with forgiveness, redemption, free will, American Exceptionalism, interventionism, fundamentalism, secularism, and a great many more "isms", plus the tendency of revolutions to replace one tyrant with another.

An Updated Re-release of Infinite containing all DLCs came out in November 2014. Another rerelease compiling all three games (minus the multiplayer elements of BioShock 2) came out on September 13, 2016 for the Xbox One and PlayStation 4, September 15 for PC and May 28th, 2020 for Nintendo Switch.

, but little else is known besides that.

Tropes found across the series:

"We all make choices, but in the end, our choices make us."