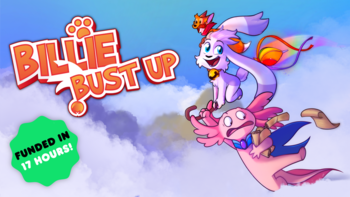 Protagonist Billie, her pet Oscar, and The Mentor Aristotle
Advertisement:

on Kickstarter. It features a variety of talent, such as music composers Daniel Ingram (who worked on Littlest Pet Shop (2012) and My Little Pony: Friendship Is Magic) and Gooseworx (creator of Little Runmo), and voice actors Michael Kovach and Edward Bosco.

Although the game is currently in development, a Pre-Alpha Demo was made publicly available through Steam

and Itch.io (the latter password-locked due to Kickstarter backers getting early access to it), which contains a test level that demonstrates all of Billie and Oscar's abilities, as well as a boss fight against one of the villains, Fantoccio. Previous demos have been released, but only through an official Patreon

, and only to patrons. For now, only material from Publicly Available Demos and Trailers should be listed below, as anything in pre-release material is subject to change during development.

Tropes Present in the Trailers and/or Demo Version: