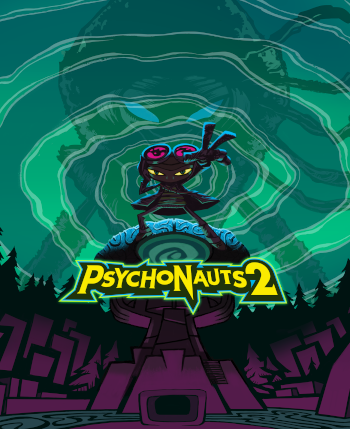 "If the other agents vouch for you, I might be able to get you a spot... in the intern program. But don't be late for orientation. I hear the counselor's a real brain-buster.
Welcome to the Motherlobe."
— Hollis Forsythe
Advertisement:

Psychonauts 2 is an Action-Adventure Platform Game from Double Fine Productions, headed by former LucasArts employee Tim Schafer. It was released for Microsoft Windows, macOS, PlayStation 4, Xbox One, and Xbox Series X|S on August 24, 2021 on Game Pass, and August 25, 2021 in general, and while Double Fine would like to

release it on the Nintendo Switch, there are currently no existing plans for a Switch release.

As the continuation of Psychonauts and Psychonauts in the Rhombus of Ruin, Raz finally gets to go to the Motherlobe, Psychonauts headquarters and his lifelong dream destination. There he can see Sasha and Milla in their natural environment — international espionage. But things are amiss from the very start, as Raz soon learns that whoever hired Dr. Loboto to kidnap Truman Zanotto in the previous title could have only been someone within the Psychonauts themselves. In other words, there's a mole loose in the organization. Even worse, whoever this mole is has a dangerous threat as their insurance to make sure Loboto stays silent about his identity: the ruthless Hydrokinetic psychic Maligula, infamous for her role in the disaster known as the Deluge of Grulovia, where she flooded an entire country singlehandedly. Though she's been dead for years, the mastermind seems confident he can resurrect her, a thought that sends unease throughout the organization.

Entering into the intern program, Raz has his hands full- not only do his fellow interns not like him, but Raz must go on a mission to stop the resurrection of Maligula at all costs. To do so, he must prowl the depths of the Motherlobe for its worst secrets, uncover the remains of its dark and horrible past, figure out who the mole is and stop them, as well as sorting out personal problems with his family and his kind-of-sort-of-girlfriend Lili. But little does Razputin know that he has a much more personal relationship with this mission than he initially realizes...

Hollis' Hot Streak, which is a corruption of the hospital portion of Hollis' Classroom, having turned its various wards into rigged betting game rooms thanks to Hollis' newfound gambling addiction.

Hollis' Hot Streak, which is a corruption of the hospital portion of Hollis' Classroom, having turned its various wards into rigged betting game rooms thanks to Hollis' newfound gambling addiction.