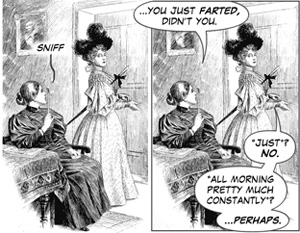 This is what happens when the story or themes behind a cartoon, comic, or such don't match their art style. It can be intentional (a specific way for the author to get their point across) or unintentional, in which case it is often jarring. It is often used to portray a work of fiction within another, so the audience doesn't mistake it for "reality". In such instances, Stylistic Suck may come into play.