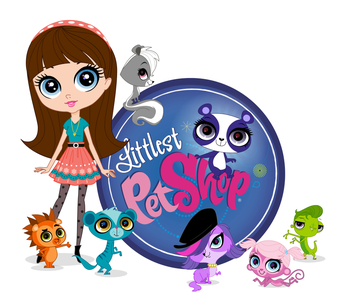 "We can be, who we wanna be / At the Littlest Pet Shop, you and me!"Note Clockwise from top: Blythe, Pepper. Centre: Penny Ling. Bottom: Russell, Sunil, Zoe, Minka, Vinnie.
Advertisement:

The best-known Animated Show adaptation of the Littlest Pet Shop toyline, which ran on The Hub (later Discovery Family) between 2012 and 2016. This incarnation was developed by My Gym Partner's a Monkey creators Timothy Cahill and Julie McNally Cahill.

The series follows young, aspiring fashion designer Blythe Baxter and her father as they move into a big city apartment above the Littlest Pet Shop—a day-camp for pets of all kinds. Her adventures begin when she discovers that she alone can miraculously understand and talk to all of the pets. Learning that the pet shop is about to close down because of the Largest Ever Pet Shop, which is run by the wealthy Biskit family, Blythe agrees to help save the pet shop. After this initial setup, the series focuses on Blythe and the pets' wacky adventures. It also follows Blythe's life as an Ordinary High-School Student and her comical conflicts with the Rich Bitch Biskit Twins.

In America, Shout! Factory's Shout! Kids imprint has released several first season episodes on DVD. All four seasons were also available for streaming on Netflix for a time, but unfortunately have been taken down, likely due to lack of interest in renewing the show's license.

Had a comic book

from IDW Publishing, but only lasted five issues.

Ran for four seasons from 2012 to 2016, making it the third longest running show originally from The Hub behind The Haunting Hour and My Little Pony: Friendship Is Magic. Eventually reached its end when Hasbro cancelled it due to poor toy sales. The Series Finale aired on June 4, 2016. Succeeded by Littlest Pet Shop: A World of Our Own in 2018.

The entirety of the show can be found on Tubi streaming service.

Now has its own Best Episode Crowner!