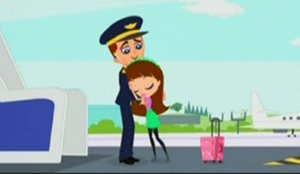 "I started missing you the second I found out you were going away. Now you listen to me, Blythe Baxter, you will not worry about me, the pets, or your friends, because we're all going to be fine. All you need to do is concentrate on this wonderful opportunity and have a great time. Got it?"
Written by Julie McNally Cahill, Tim Cahill, and Roger Eschbacher
Teleplay by Roger Eschbacher

Blythe has just received notification of acceptance into the summer program of Fashion University North, the top-ranked fashion design school in the country and has let both Mrs. Twombly and the pets know. At first, they're delighted to hear her moving up in life but become disappointed when she has to leave The Littlest Pet Shop, potentially forever when Blythe mentions doing fashion design as a career. When Blythe leaves, the pets go into a musical number in an Imagine Spot recording studio, "Stay Here Forever," expressing their concerns about not having Blythe around anymore.

Blythe excitedly shows off Fashion University North to her father through the website. While Roger is totally supportive of Blythe's ambitions, he displays great anxiety over her being gone. When Blythe goes to her room, Mrs. Twombly stops by to visit Roger to try to come up with ways to keep Blythe around over the summer. Roger takes slight offense to her suggestions and convinces her to let Blythe spend her summer at Fashion University North. Russell, peeking from around a corner, overhears this conversation and relays the information back to the other pets.

In Blythe's room, Blythe excitedly tells the news to her friends. She lets them know that Fashion University North is actually some distance away, meaning she won't be able to visit them at all. Jasper takes it the hardest.

Russell informs the other pets that Blythe will return in the fall. Sunil and Minka don't really know how long that will be as Minka uses a calendar as a snack, though Vinnie does know it will be for months. As the pets worry themselves to pieces, Russell points out that Roger and Twombly support Blythe's decision to leave and proposes they make going-away presents. The other pets say it's a good idea.

The last day of school has just ended, and Jasper, Youngmee, and Sue immediately start thinking about Blythe. Jasper reveals that he bought four tickets for the grand re-opening of Zany Island in hopes of convincing Blythe to stay. Blythe still intends to go to Fashion University North, but Jasper, Sue, and Youngmee will still attend Zany Island without her.

In one of her visits to The Littlest Pet Shop, Blythe apologizes to Zoe about not having the time to design more outfits for her. Zoe tells Blythe not to worry, and the other pets join in, especially Vinnie. When Blythe leaves the room, Russell gathers up ideas of how they're going to give Blythe a surprise. Each of them showcases their talents except for Russell, who realizes he has to do something too.

In Blythe's absence, Mrs. Twombly has hired a stand-in, Madison, a ditz and a hypochondriac, to take care of the pets, though in truth Mrs. Twombly just asked the first person she saw when peering outside. When Blythe finds out, she tests Madison if she can also talk to the pets, but she can't. Blythe retreats to her room and Russell continues to decide what the present should be, again reminded that he hasn't come up with something himself.

As Roger loads the car in preparations for the trip, the pets all perform one after another, plus Minka showing the painting she made depicting Blythe around all of the other pets. Russell apologizes to Blythe about not providing her a gift, but Zoe and Pepper point out that Russell contributed by setting up the show to begin with.

Traveling out, Mrs. Twombly informs Blythe that she's set up a webcam in the day care room so Blythe can always stay up to speed with the pets as Madison goes in to start her job. Blythe chats with her friends one last time before she heads into Roger's car. At the airport, Blythe says farewell to Roger, who's barely holding back his tears, as she dashes off to board the shuttle taking her to Fashion University North.