You Are the New Trend 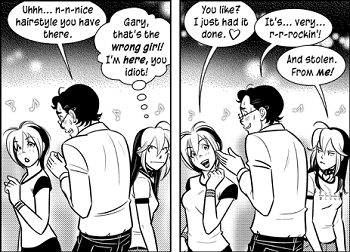 For some reason, the character's distinctive look or mannerisms becomes the model for the latest hot trend. Perhaps the character has suddenly become famous because of his deeds or just random happenstance, or perhaps he's provided an inspiration to a trend-setter.
Advertisement:

Some characters may welcome the attention; more commonly, it will be embarrassing or annoying. The latter is especially true when the new trend causes wacky hijinks such as other people being mistaken for the character. In some cases, the character's actual outfit will be dismissed as a lame attempt to follow the fashion. May lead to a Be Yourself Aesop.

Compare Accidental Dance Craze. See also I Just Want to Be You! and Sincerest Form of Flattery. Compare 15 Minutes of Fame for more general examples of sudden short-lived public attention.