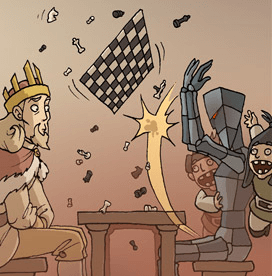 Some Sore Losers go to the extreme.
Gabe: What am I supposed to do?
Tycho: What every Dungeon Master has done, ever, for all time.
Gabe: Persevere?
Tycho: Shit no. Quit in a huff.
— Penny Arcade, "The Things We Do for Love"

A character is playing a game (usually with other people or online), and quite simply, they're losing. Maybe they didn't read up on how to effectively play the game, maybe they're off their A-game, maybe it's their teammates, or perhaps the other guy just found a way to break their supposedly impenetrable defense. Even the whims of the Random Number God could be uncooperative. Whatever the reason, their armies are dying, their buildings are burning, their avatar has been sliced into six different pieces, and they are about to get this loss added to their permanent gaming record. If they had a winning streak or an undefeated season, it's about to end now.

Enter the Rage Quit: If they can't win this game, no one can! Screw going down with the ship and using the loss as a learning experience; someone is about to put the first black mark on their untarnished gaming record, truly a Fate Worse than Death! Alternately, it need not even be an actual loss or a bad game; some players have ragequit over the most trivial of matters, such as their favorite map not being selected, or their favorite character being used by someone else. In any case, if they can't have it, then no one will!

As you can well imagine, this is obviously incredibly annoying to the opponents; players who ragequit too often tend to look weak, and it pisses off other players who often just want to get through a game without the other guy backing out on them at the last minute because they don't want to get stuck with a loss.

Rage quitting is also common in people who simply get frustrated at the game and quit early to cool off, whether it be from several streaks of bad luck or results in a game simply not working out in their favor, despite everything they've been doing. Of course, quitting is still quitting, which greatly annoy other players who want to finish the game or earn the win.

In some very rare instances, the rage-quit may not in fact be due to the player sucking or getting frustrated. Rather, it's punishment for allies of the player who are in some way abusing game mechanics or items to make the player's experience miserable. As vengeance, the player abandons their team at the worst possible moment.

Rage-quitting may result in a Non-Standard Game Over scene.

Measures to alleviate this vary, as documented at Anti-Rage Quitting. Some games will register a rage-quit as an automatic loss to the player who quit (possibly with an automatic win for everyone else), or even keep a separate tally for the number of "disconnects". Unfortunately, it is impossible for the network to distinguish a ragequit from actual technical problems (a power outage, for example), and there are usually still ways for players to exploit the ranking system to avoid taking the loss. Other systems use a punishment system where the player leaving a game will be unable to find/join another game for a certain amount of time in order to prevent them from pulling a rage quit multiple times in a row, although this can greatly annoy players who quit a game for a good reason.

A quitting player may be more sympathetic when they're quitting a single-player game that is badly designed with Fake Difficulty or Guide Dang It! moments, Moon Logic Puzzles, That One Level or That One Boss, or a Dethroning Moment of Suck. Quitting such games tends to be more justifiable since the quitter isn't causing problems for any other human players, and the games may become infamous among fans if enough of them quit for the same reason.

More broadly and figuratively speaking, daily life can be considered a kind of "game" people playnote Hence, committing suicide can be considered the ultimate form of ragequitting, and its various situations a variety of mini-games. Some people, when they perceive a given situation as monstrously unfair, will do this in place of simply cutting their losses and refusing to play anymore or fleeing in abject terror when they're losing; publicly announcing the decision to quit while denouncing the "game" itself is often considered less shameful and more socially respectable than mere forfeiture or flight.

Can be spelled both "rage quit" or "ragequit". A common nickname is "Alt-F4", the shortcut for closing Windows programs; another is "QQ", which originated with Warcraft II, as the shortcut Alt+Q+Q would exit a match, and then immediately close the game.

Compare Save Scumming, a mostly single-player phenomenon that may not entirely be caused by RAGE at losing. Can also mix with Jerkass/Griefer where people may quit the game, in addition to losing, exclusively to piss off other people. People who quit may literally say Screw This, I'm Outta Here. A Sore Loser may be prone to this.

See also Fake Difficulty, Nintendo Hard, That One Boss, That One Puzzle, That One Level, Flipping the Table. For more information see Rage Quit Baddie.

For when it's a character quitting a job in this manner rather than any kind of game, see Take This Job and Shove It.

Not to be confused with the Rage Quit series by Michael Jones of Rooster Teeth's Achievement Hunter, though there are some cases of rage quitting in it.

This page is for In-Universe and Invoked examples only. If we had examples such as "{Insert Game Here} is prone to ragequitters", you might as well add every game in existence to this list. In addition, every film and TV franchise fandom has had fans "rage quit" at one point or another. For your personal experiences with Ragequitting, take it to the message boards.

You know what, I've had enough of this page!
(ノಠ益ಠ)ノ︵ ┻━┻

What happens if you quit an online fight.

What happens if you quit an online fight.