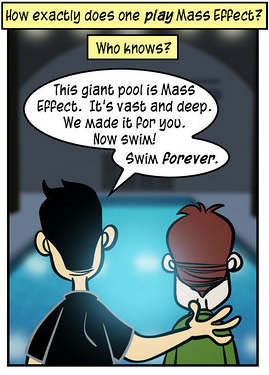 Swim until the water is all you have ever known and all you ever desire.
"I have a hard time with GTA. I find the total freedom paralyzing. When given the opportunity to do anything, I tend to do nothing."
— Tycho, Penny Arcade
Advertisement:

You just got a new game! It's huge, expansive, non-linear! You can do anything you want to, the world is completely open to you. So... what do you wanna do?

You suddenly find yourself paralyzed, you can't figure out where to go next. You wander aimlessly, sometimes for hours, until you're able to find a goal.

This is what happens when a player starts playing a Wide-Open Sandbox or Metroidvania game and ends up getting stuck. First comes surprise, then consternation, confusion, desperate flailing around, despair, potential killing sprees, and in the worst cases, death, quitting the game without having even left the starting town. This is particularly common when they start playing again after a long break.

Efforts to avoid this in sequels may actually be seen as overly-pampering. Openness is not bad; some players prefer the risk of getting lost to being railroaded. Well-designed games would often find remedy in an Achievement System which provides inspiration and impulse to the player. Compare Alt Itis, which largely focuses on differing character abilities and options, and Sidetracked by the Gold Saucer, which may overlap. Contrast No Sidepaths, No Exploration, No Freedom.