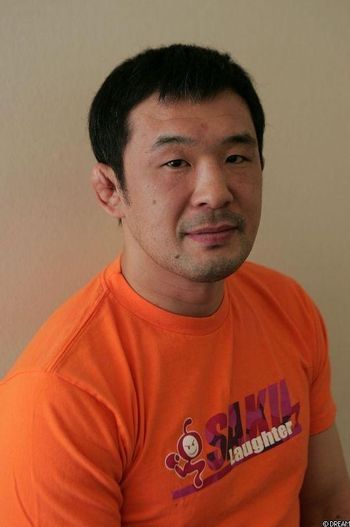 "Kazushi Sakuraba was a stone in our shoes. He was one of the most amazing fighters who came from Japan, and most amazing was his ability to play smart. He was able to adapt himself and to figure out ways to break his opponents. He was very succesful at what he did."
—Renzo Gracie about Sakuraba
Advertisement:

Kazushi Sakuraba (born July 14, 1969) is a Japanese Professional Wrestler and Mixed Martial Arts fighter, best known for his role in the existence of PRIDE Fighting Championships. He originally started as a pro wrestler in Union of Wrestling Forces International, learning the style of shoot wrestling under the tutelage of legends Nobuhiko Takada and Billy Robinson. Kazushi showed brilliancy and began climbing up the roster, but UWF International closed doors before he could achieve a bigger status, so he joined Kingdom, a promotion founded from UWF remnants. However, he found a new field in the blooming MMA world: where his mentor Takada had failed, tapping out in the hands of Brazilian Jiu-Jitsu chieftain Rickson Gracie, Kazushi thrived, gaining popularity after winning the UFC Japan tournament against a BJJ black belt despite being, like Takada, just a pro wrestler. He then moved to PRIDE and showed his skills submitting several BJJ fighters, eventually making the impossible at the time and defeating a member of the Gracie family, Royler, Rickson's brother. Sakuraba went to beat Rickson's other brother Royce in a fight which made history and turned him into a legend, being nicknamed "Gracie Hunter", and he later added Renzo and Ryan to his record. Hailed as a national hero by Japanese press, Sakuraba became PRIDE's native ace, fighting superior opponents throughout a grueling five years career and getting known by his unorthodox, pro wrestling-influenced style and his willingness to be gruesomely beaten down. Aside from his BJJ hunts, Kazushi also held victories against three of his own style's best wrestlers, Masakatsu Funaki, Ken Shamrock and Ikuhisa Minowa. Passed his prime, he later moved to HERO'S and DREAM promotions, but his many injuries told the world that his era had passed. After a four year run working for New Japan Pro-Wrestling and a brief return to MMA in Rizin, Sakuraba is currently unofficially retired from MMA and running the submission grappling promotion Quintet.