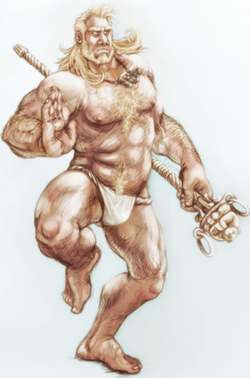 A fundoshi in practical application.
Advertisement:

The fundoshi (Japanese: 褌 / ふんどし) is the traditional Japanese style of men's Loincloth. It is a single long piece of cloth wrapped into place and fastened by twisting and tucking alone. This versatile tying technique makes any suitable piece of cloth a potential fundoshi. A similar technique can also be used to wear cloth as a headband.

Traditionally, the fundoshi was worn as a form of underwear. Its role as underwear has decreased in modern Japanese society, as more people wear Western-style underpants. The fundoshi still may be worn during traditional festivals, or as swimwear. In fiction, it will often be worn constantly to complete a Japanese set of Awesome Anachronistic Apparel.

A Sub-Trope of Loincloth. Compare Barely-There Swimwear, Sweater Girl, Sexy Soaked Shirt. Not to be confused with fujoshi or their male counterpart fudanshi.