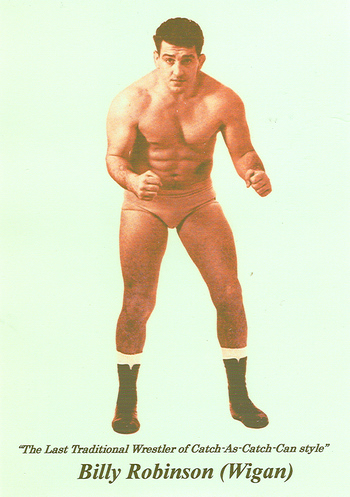 The Physical Chess Master
"Wrestling is my life. When I was a little boy, all I did was wrestle. When I get to 90 years old, if I live that long, I will be teaching wrestling."
— An impassioned Billy Robinson declared during a taping of a Continental Wrestling Association match in Memphis in 1979.
Advertisement:

Billy Robinson (September 18, 1938 – March 3, 2014) was a British Professional Wrestler, known for his role in the development of Mixed Martial Arts in Japan. A former wrestling champion, he trained Catch Wrestling in Billy Riley's Wigan Snakepit. He then went to travel around the world winning more titles and making people cry uncle, and this included North America as part of Verne Gagne's American Wrestling Association, Canada with Lutte Internationale, and Japan under New Japan Pro-Wrestling, All Japan Pro Wrestling and Universal Wrestling Federation. The latter would be his most notorious work, as he worked as a trainer as much as he did as a wrestler, and ended up being a vital part of the development of shoot-style along with his famous rival Karl Gotch. He worked in the UWF Snakepit until his death in 2014.

"The Strongest Tropes in Europe":