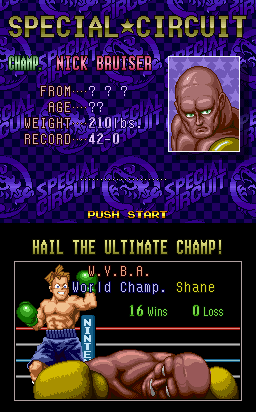 A regular scourge in the ring: a character so powerful, so unstoppable, that not even the greatest of fighters can overcome his wrath. Be it a Gentle Giant, an Arrogant Kung-Fu Guy, or The Big Guy with a mean streak, this character is an unbeatable scourge that other fighters either dread facing or anticipate fighting in order to gain fame for being the first to beat him. However, they all fail. But nothing lasts forever...

Basically, this is a character who is introduced as and/or is famous for being brutally unstoppable, and, for a long time, they continue to be so, until that one hero (or villain) can finally show the world what he's made of by defeating him. These characters appear in varied roles: they can be a Big Bad, The Dragon, or, sometimes, just some seemingly unobtainable goal. Often, such a character will also be either a Jerkass or somewhat intimidating to give the hero even more reason for beating him, but not always. This character may also play a role of the Goliath if the one who beats him looks to be totally outmatched at first glance.

Said undefeatable nature may come in the form of an Implacable Man or Hero Killer.

Depending on the character, the fighter can still stay as powerful as they were after being beaten, but, occasionally, once beaten, they lose their power and become a regular fighter just like the rest. See Too Powerful to Live, Lord British Postulate, and Did You Just Punch Out Cthulhu?.

Compare The Worf Effect. Not So Invincible After All is the Super-Trope. Sub-Trope to Broken Win/Loss Streak.