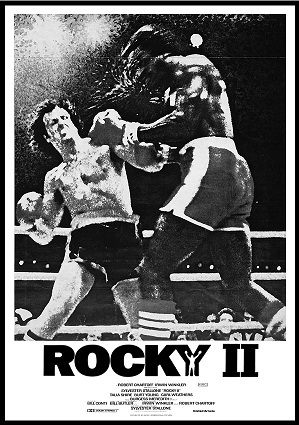 The one where Rocky and Apollo get a rematch.

Rocky II is a 1979 American film which is the first sequel to Rocky. It was written, directed by, and starring Sylvester Stallone.

The story picks up directly after the ending of the first movie, in which Philadelphia underdog Rocky Balboa was able to do what no other boxer could: pushed World Heavyweight Champion Apollo Creed to a full fifteen-round match. Although Apollo was awarded the victory on points, his wounded pride (and a heap of hate mail accusing him of losing) pushes him to demand a rematch from Rocky so he can decisively beat him once and for all.

Rocky initially turns down the challenge, as he was able to accomplish his personal goal of "going the distance" in the first bout, and retires due to an eye injury sustained during the fight. However, circumstances conspire to force the two men back into the ring: Apollo is driven towards increasingly desperate actions to eliminate what he sees as an existential threat to his career and legacy, and Rocky proves unable to manage his newfound fame and loses most of his money. Eventually the build-up of personal and practical reasons culminates in a rematch being scheduled, set amidst the backdrop of Rocky marrying Adrian and the birth of their son.

The film is followed by Rocky III, released in 1982.