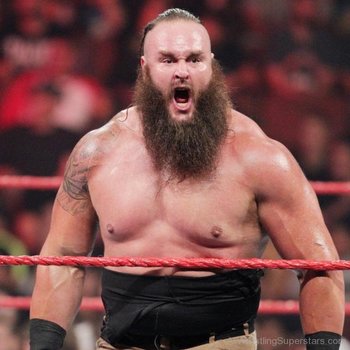 The Monster Among Men.
"If doom had a face, it would look like Braun Strowman."
— Corey Graves, WWE color commentator
Advertisement:

Adam Scherr (born September 6, 1983) is an American professional wrestler and former strongman most recently signed to WWE, where he performed under the ring name Braun Strowman.

He made his official wrestling debut as new member of The Wyatt Family on August 24, 2015 episode of Raw attacking Dean Ambrose and Roman Reigns.

He was later split up from the Wyatt Family during the 2016 draft and began his solo career in a variety of Squash Matches before getting annoyed and demanding more competition from management. He is a 2-time Raw Tag Team Champion (once with a 10-year old kid named Nicholas and once with Seth Rollins), a one-time Intercontinental Champion and a one-time Universal Champion.

Strowman was one of six wrestlers released by WWE on June 2, 2021, joining 10 other wrestlers who had been let go that April. Once his noncompete expired, he started working the indies under his real name. In February 2022, he and EC3 announced they were starting a new promotion known as CYN (for "Control Your Narrative").