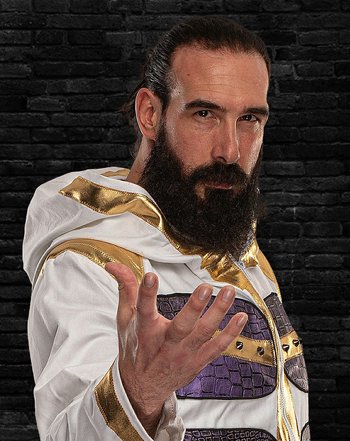 "That's MISTER Brodie Lee to you!"
"It's [today]. You know what that means."
Advertisement:

He debuted in late 2002 as in the upstate New York independent scene where he competed until he arrived in CHIKARA in 2007. His original gimmick, "The Right Stuff" Brodie Lee, was based on the New Kids on the Block. This ended at the CHIKARA show Here Come the International Invaders: Attack of the Phantom Sith, August 17, 2007, when he introduced his new trucker gimmick, "The Big Rig" Brodie Lee, and allied himself with the Olsen Twins (Colin [Delaney] and Jimmy) against the Colony (Fire Ant, Soldier Ant and Worker Ant) and scored the win for his team by pinning Worker Ant. This was during a year-long streak where he did not get pinned or submitted.

As Brodie Lee, he also competed for Ring of Honor, Dragon Gate/Dragon Gate USA, CZW, the German westside Xtreme wrestling and a variety of independent promotions. Among his in-ring achievements, he is a former WWE NXT Tag Team Champion

and was the final JAPW New Jersey State Heavyweight Champion

He debuted in WWE as a member of The Wyatt Family. On November 17, 2014, he won the Intercontinental Championship from Dolph Ziggler, ending Ziggler's 56-day reign. He also was a SmackDown Tag Team Champion, alongside Bray Wyatt and Randy Orton. But after Randy's machinations led to Bray ousting Harper out of the Family, he turned on his former master and started a singles career. Later in 2017 he teamed up with Rowan again to form the Bludgeon Brothers. After an injury in August 2018 sidelined him for several months, Huber was planned to engage in a feud with Sami Zayn throughout 2019, but after a post-WrestleMania SmackDown dark match with EC3 was poorly received by Vince McMahon, the feud was scrapped. After a fallout with Vince led to him being off television for five months, he once more paired with Rowan to feud against Roman Reigns and Daniel Bryan at a tag team match for that year's Hell in a Cell pay-per-view, which the Bludgeon Brothers lost. Two months after that match, Huber was released by WWE on December 8.

As WWE owns the Luke Harper name, he reverted back to the Brodie Lee ring name, and on the March 18, 2020 episode of AEW's Dynamite, he revealed himself as the true identity of the 'Exalted One' of The Dark Order. On August 22, 2020, he defeated Cody Rhodes to become the second AEW TNT Champion

. He would hold onto the TNT championship for 8 weeks, defeating Dustin Rhodes and Orange Cassidy, before Cody reclaimed the title in a dog collar match on the October 7 episode of Dynamite.

Sadly, that match was the final one for Jon Huber, as he passed away on December 26, 2020 due to lung issues not related to COVID-19 (later revealed by his widow to be idiopathic pulmonary fibrosis), surrounded by his family and loved ones.

open/close all folders
In general
As Luke Harper
As Mr. Brodie Lee, The Exalted One