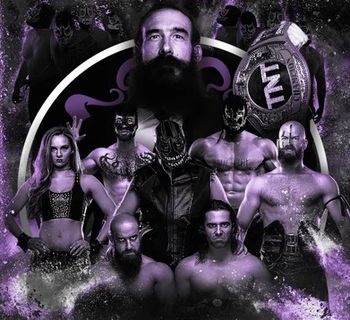 The Dark Order is a Professional Wrestling Power Stable on All Elite Wrestling currently consisting of Evil Uno, Alex Reynolds, John Silver, and -1 (Mr. Brodie Lee Jr.)note While only 8 years old when inducted into his father's group, Brodie Lee Jr. has actually been signed to an official AEW contract.

The group debuted at Double or Nothing 2019, only consisting of Evil Uno, Stu Grayson, and a handful of Creepers, seemingly as a reference to supervillains seen on shows such as Teenage Mutant Ninja Turtles and Power Rangers. While reception of the group was initially mixed, the group began to gain interest when Evil Uno started to release a series of vignettes in order to recruit new members, leading to the addition of former jobbers Alex Reynolds and John Silver.

Starting in 2020, Evil Uno began to tease the arrival of his superior, the Exalted One, who would later be revealed to be none other than Wyatt Family alumnus Luke Harper, now under his original ring name Mr. Brodie Lee. On the August 22 episode of Dynamite he defeated Cody to win the AEW TNT Championship, the Dark Order's first title. During this title reign, Brodie Lee, Colt Cabana, with Stu Grayson and Evil Uno would fight various Facesnote  Matt Cardona, Scorpio Sky, Dustin Rhodes, and QT Marshall in an 8 man tag match at All Out 2020. Brodie Lee would hold onto the TNT championship for a few more week afterward, defending against Dustin Rhodes and Orange Cassidy before Cody reclaimed the title in a dog collar match on the October 7 episode of Dynamite.

Sadly, that match was the final one for Jon Huber, the man behind the Mr. Brodie Lee gimmick, as he passed away on December 26, 2020 from idiopathic pulmonary fibrosis, surrounded by his family and loved ones. Shortly before Huber's passing, his son Brodie (eight years old at the time) made his first appearance with the stable as Brodie Lee Jr., aka –1.

In 2022, the number of members in the Dark Order would slowly drain smaller. Grayson and Angels would leave AEW after their contracts were not renewed, Colt Cabana would become part of the roster of Tony Khan's re-imagining of Ring of Honor, Anna Jay would leave the Dark Order and become a member of the Jericho Appreciation Society, and Preston Vance would betray the Dark Order to work under Rushnote This storyline was originally started by Andrade, but Rush would replace him after the former was suspended indefinitely following a shoot backstage fight with Sammy Guevara. after the former convinced him that the Dark Order was holding him back. As of this writing,only Uno, Silver, Reynolds and -1 are the only remaining members of the group.

Tropes below apply to the group's actions in AEW as well as their segments on Being the Elite.