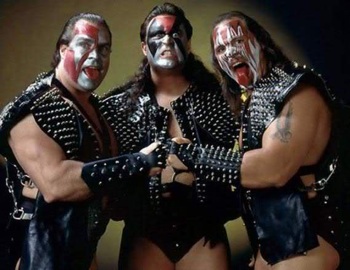 Ax (left), Smash (right), and their later third member, Crush (center), proving Evil Is Cool and it will pound the crap out of you.
"Here comes the Axe
And here comes the Smasher
The Demolition, walking disaster
Pain and destruction are our middle names"
Advertisement:

Demolition is a professional wrestling tag team most prominent during the late 1980s and early 1990s in the WWF. Debuting in January 1987 of an episode of Superstars, Demolition began as the WWF's answer to The Road Warriors. Decked out in studded, leather outfits and black masks (which would be removed to reveal their signature red/silver face paint), Ax and Smash soon became a hugely successful tag team in their own right, winning the WWF Tag Team Championships three times during one of the most prominent eras of the tag division.

The team was made up of Bill Eadie as Ax and Barry Darsow as Smash. note The latter was originally played by Randy Colley, who was replaced when Eadie and WWF management realized fans recognized Colley from his old role as Moondog Rex of The Moondogs. Originally managed by Luscious Johnny V, they eventually settled on Mr. Fuji as their manager. Ax and Smash ran roughshod over the tag division, culminating in their first WWE World Tag Team Championship

win at WrestleMania IV, over Strike Force (Rick Martel and Tito Santana). They got even more successful following a Heel–Face Turn, where Mr. Fuji turned on them and joined up with a newly Heel Powers of Pain, leading to a WrestleMania V feud. For the next few years, Demolition were one of the most, if not the most, popular tag teams in the company... until The Road Warriors themselves showed up in the WWF. Combined with a Face–Heel Turn and Bill Eadie's poor health at the time, not even a third member (Brian Adams, a.k.a. Crush) could revive their momentum.

Their last title reign ended at the hands of the Hart Foundation at SummerSlam 1990, and soon the team was simply Smash and Crush. Eadie departed the WWF, while the other two made various attempts to reinvent themselves. Crush completely made over his character for a Heel–Face Turn and actually showed potential as a breakout star as the "Hawaiian" Crush, but then turned heel again to feud with Randy Savage. Meanwhile, Barry Darsow attempted to reinvent himself as the Evil Debt Collector Repo Man, who made little impact other than cartoonish, over-the-top promos and being a longtime favorite of WrestleCrap's RD Reynolds.

In the late 2000s, Eadie and Darsow reunited for some independent shows.

"Tropes and destruction are our middle names!":