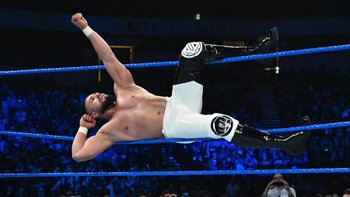 Tranquilo
Click here to see him as La Sombra 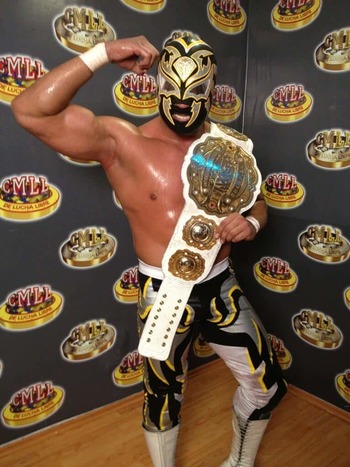 Manuel Alfonso Andrade Oropeza (born November 3, 1989 at Gómez Palacio, Mexico) is a Mexican professional wrestler best known for his run in WWE from 2015 to 2021 under the name Andrade "Cien" Almas (late in his run shortened to just Andrade).
Advertisement:

Manuel began his career at 14, working initially as Brillante Jr. In 2007, he was hired by CMLL and performed as La Sombra, winning the 2007 Torneo Gran Alternativa and the 2011 Universal Championship. He also performed at New Japan Pro-Wrestling and was one of the founders of the mexican Power Stable Los Ingobernables, from which a more popular Japanese branch later flourished. His stint in CMLL came to an end after he lost his mask in a Lucha de Apuestas against Atlantis.

In 2015 he was hired by the WWE, and began performing in the NXT brand as Manny Andrade, before settling onto Andrade "Cien" Almas as his ring name. Initially a face wrestler who could never connect with the audience, he turned heel and got Zelina Vega as his manager, getting a proper propulsion to his career ending with him conquering the NXT Championship, losing the title to Aleister Black on NXT TakeOver: New Orléans, before being called to the SmackDown brand on the 2018 Superstar Shakeup. In 2019, he was drafted to Raw during that year's Shakeup. However over the next few years he was constantly underused, rarely appearing on TV (especially after Vega was released from the company in 2020) and in early 2021 he requested his release. Despite initially refusing to grant it, the company reconsidered and he was released on the 21st of March. After much anticipation about where he would end up next (including an appearance in AAA), he became All Elite on the 4th of June as "Andrade el Idolo".