Western Animation / The Adventures of Paddy the Pelican 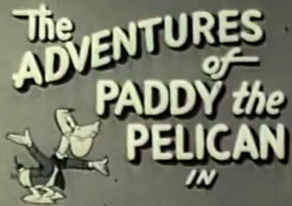 Wait, the adventures are in the show? Hoo boy...
Advertisement:

Black-and-white cartoon created by Sam Singer that aired in Syndication in 1954. Little is known about it: the titular character was previously used in a puppet show aired on WENR-TV in Chicago around 1950-51, which was also broadcast nationally on ABC. The cartoon might date from the same era, or may have been produced slightly later; the end titles have 1954 copyrights, but those may have been added later on.

Almost all of the cartoon shorts have Paddy star in various antics, though he doesn't really appear in "The Land of More". Noticeable traits of the show are its repetitive animation and overall poor production values.