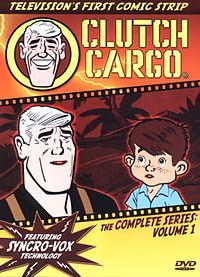 This syndicated Adventure Series from 1959 is most remembered for its Synchro-Vox technique, in which the filmed lips of human actors were superimposed on static drawings. Otherwise the animation was extremely limited. We're talking one frame every two, three seconds. Incidentally, this is partly why Synchro-Vox was near-immediately discredited and is only used for comedic effect now.

The hero, Clutch Cargo, was a brawny pilot who flew to various places around the world with his young ward, Spinner; Spinner's dog, Paddlefoot; and a bearded explorer, Swampy. The 52 stories were serialized into 26 half-hour episodes in five chapters of five minutes each.