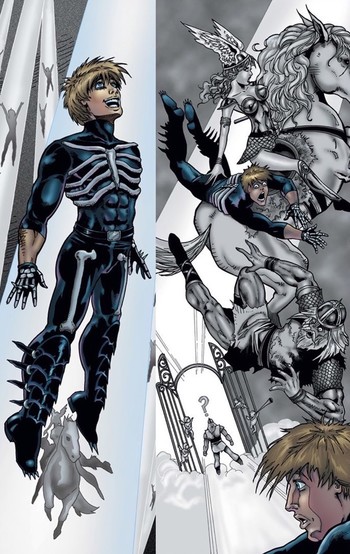 Hey! Those Pearly-Gates were mine!
"She didn't see any light because there was nothing left in her to see that light. Because so much of her was gone and destroyed by the indoctrination that she was subjected to... that there was no light for her. That there is no After for her."
— Lorerunner describing Matriarch Benezia, Mass Effect Lorerun, Part 4

The Always Lawful Good Chronic Hero has died after a life of stopping to help. He Goes Into the Light and... it's Fire and Brimstone?

The dead are not ending up in their correct afterlife. The forces of evil may be nabbing good souls, either before they complete their journey to their final reward, or actually kidnapping them from paradise after they arrive. Souls have so many uses, after all, and even if they didn't, this is a great way to snub the Council of Angels. And when Hell Invades Heaven, there'll be that many less enemies to deal with.

Alternately, it may not be specifically malicious. The Obstructive Bureaucrats running the Celestial Bureaucracy may have cocked things up or perhaps the Afterlife Express hit the wrong switch-track. In these cases, you can also end up with unrepentant monsters trashing Fluffy Cloud Heaven.

A third option is an Infernal Paradise, where the character has gone to what would be a genuine eternal reward for an insane cultist or someone Too Kinky to Torture, but it's not what he was expecting.

Compare This Isn't Heaven, where a character's personal heaven turns out to be an Ironic Hell; Hell of a Heaven, where it's not as enjoyable as advertised; and Barred from the Afterlife, where a soul can't even pass on in the first place.