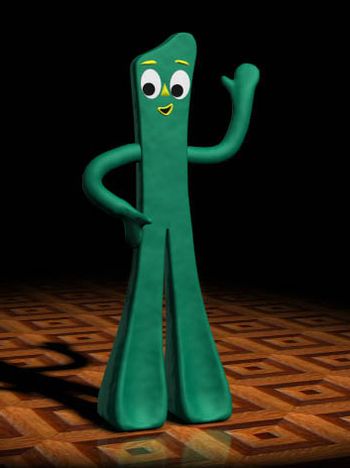 Art Clokey (who would go on to create Davey and Goliath) produced this series of clay animated shorts for NBC in The '50s after screening his student film Gumbasia for Twentieth Century Fox. Clokey also performed some of the character voices.

Gumby himself was portrayed as a young boy capable of changing his shape at will. He also could walk into books and participate in the stories therein. His friends included Pokey, a red horse; Prickle, a "prickly" yellow dragon (except for the episodes where he self-identified as a dinosaur); and Goo, a blue female character who rather resembles a small sea lion with a blond wig (Word Of God said she's a "gooey blue mermaid"). Gumby's foes, the Blockheads, never spoke.

The character debuted in 1956, as a segment of Howdy Doody. He was successful enough to receive his own spin-off show. The original Gumby shorts aired on NBC in 1957. After the series' network run ended, Clokey bought back the rights to his characters and produced new Gumby episodes for syndication in The '60s and The '80s. A Gumby direct-to-video movie was released circa 1995.

Gumby's 1980s resurgence in popularity was most likely attributable to a series of sketches on Saturday Night Live depicting Gumby (played by Eddie Murphy) and Pokey (played by Joe Piscopo) as actually being old-time Jewish vaudeville stars themselves playing parts. These sketches birthed the Catchphrase "I'm Gumby, dammit!" According to Art Clokey's son Joe, Art loved Murphy's sketches and even allowed him to redub some of the old Gumby shorts for another sketch.

Bizarrely, Gumby was turned into the mascot for a pizza chain

catering to college towns. They name a fair amount of stuff after characters in the series (e.g., Pokey Sticks), and the green, stretchy one himself appears on their boxes.

In 2014, Seth Green's Stoopid Buddy Stoodios produced new stop-motion Gumby animation for an ad for Intel's Pocket Buddies app. In 2015, the Jim Henson Company made a deal with Clokey's estate to produce a new Gumby series, though no news has been forthcoming and the project may be dead.note A 4chan leak of stills turned out to be from the aforementioned Intel ad. In 2017, Papercutz released a Gumby monthly comic book, which was cancelled after three issues.

In 2022, Fox Entertainmentnote Which is a unit of the now-separate Fox Corporation after Disney purchased most of 21CF in 2019, which included the 20th Century Fox studio purchased the rights to Gumby and other characters from Clokey's estate. Fox will develop, produce and distribute hours of content for the franchise.

The 1995 movie provides examples of: