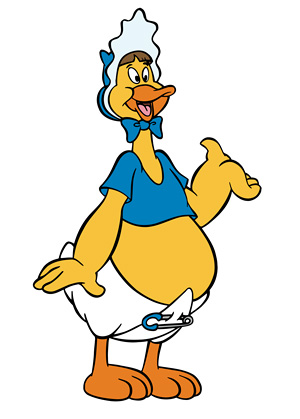 "What Luck! That’s some Duck
A Real Cutie, BABY HUEY!
As Big as a house, as gentle as a mouse.
Drinks milk by the Cow-ful, BABY HUEY!
Bumbles along, singing his song, so he better, better beware
He’s not always right, but boy what a sight. AND ITS SCARY UNFAIR!
A Glorious fellow, what a shade of yellow
A little bit screwy, Baby Huey!
He’s half a ton, of yellow fun.
Wadda you know? It’s the Baby Huey Show!"
— The Baby Huey Show season 2 theme song
Advertisement:

Baby Huey is a gigantic and naïve duckling cartoon character. He was created by Martin Taras for the Paramount Pictures cartoon outlet Famous Studios, and became a short lived Paramount cartoon star during the 1950s. Although created by Famous for its animated cartoons, Huey first appeared in comic-book form in an original story in Casper the Friendly Ghost #1, September 1949, as published by St. John Publications.

Huey first appeared onscreen in the Noveltoons short Quack a Doodle Doo, released in 1950. The character's voice was provided by Sid Raymond, an actor and comedian who created several other voices for Famous Studios' characters, including Katnip.

Many animated shorts featuring Huey had recurring themes. Most common among them was him trying to be just like any other kid his age. He would see his peers playing, and would immediately get excited. Whenever he tried to involve himself in the activities of his peers (also anthropomorphic ducklings) he would often inadvertently cause more problems, and as a result they would drive him away through trickery (and into tears). A hungry fox would show up, feigning friendship and setting traps along the way, all of which would prove ineffective on Huey and/or backfire on the fox. At first Huey was blissfully unaware of the fox's true agenda. But as his peers watched the annoyed fox in action from a safe distance (and fearing for his safety just as they did their own), Huey would come to realize the truth about his predator and dispose of him, usually by saying: "I think you're trying to kill me!", and would finish the fox. Other times, however, Huey would remain blissfully unaware and the exasperated fox would finally give up, fleeing Baby Huey before any more misfortune befell him. For a time, there was a running gag of the fox's final appearance in a comic strip being him fleeing from Baby Huey while exclaiming "I'm lucky to escape wid' me life!"

Harvey purchased the rights to all of Famous' original characters in 1959, and Huey continued to appear regularly in Harvey publications until 1972. Huey was rarely seen for nearly two decades afterwards, returning to comics in 1990.

Carbunkle Cartoons/Film Roman produced a new series of Baby Huey cartoons for television in 1994, which aired as The Baby Huey Show for two seasons. He also starred in a live-action direct-to-video film, Baby Huey's Great Easter Adventure, in 1999, where he was voiced by Stephen Furst, and portrayed by Rodger Bumpass.

U.S. President Bill Clinton in a 1993 conversation cited his similarities to Baby Huey: "I'm a lot like Baby Huey. I'm fat. I'm ugly. But if you push me down, I keep coming back."

In The Spooktacular New Adventures of Casper segment entitled "Legend of Duh Bigfoot", Baby Huey makes a cameo at the end of that segment.