Western Animation / Back to the Future 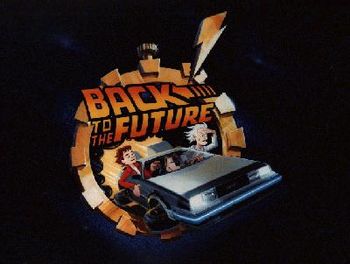 "Is there a Tannen in every century?"
— Marty McFly
Advertisement:

An Animated Adaptation of the successful Back to the Future films, that ran for 2 seasons of 13 episodes each in 1991 and 1992 on CBS; it was the very first production of Universal Cartoon Studios, which would later go on to create Exosquad, Earthworm Jim, The New Woody Woodpecker Show, and a crap-ton of The Land Before Time sequels.

The series followed on from where the films left off. Doc Brown and his family (wife Clara, originally from the 1880s, and their sons Jules and Verne) have moved back to 20th Century Hill Valley, settling down in 1991. In addition to their flying, time-traveling steam engine, Doc has built a new DeLorean, and together with his friends Marty McFly and Jennifer Parker, Doc and his family Time Travel backwards and forwards through time in search of adventure, usually meeting up with ancestors or descendants of both Marty and the films' villain, Biff Tannen.

There were also random history tidbits thrown in between scenes.

The series has a section on the recap page which needs attention.

Alternative Title(s): Back To The Future The Animated Series