Literature / A Wish for Wings that Work 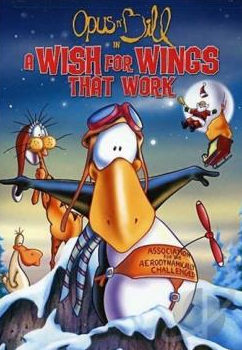 A children's book printed in 1991 by Berke Breathed, the creator of Bloom County and Outland. In it, the strips' central character, Opus the Penguin, is disappointed because he can't fly. After some failed attempts at using a flying machine bought off TV, he writes a letter to Santa Claus and asks for wings that work. Near the end, Santa's sleigh crashes in the lake and it's up to Opus to save him from the icy lake.
Advertisement:

Also in 1991, Steven Spielberg's Amblin Television arm (together with Universal Cartoon Studios, the guys who brought you Exosquad a couple of years later) adapted A Wish for Wings that Work into an animated special that first aired on CBS on December 18, 1991. Although the special was fairly well-received by critics, Berke considers it an Old Shame. It is the only Animated Adaptation of the Breathedverse to date.

This book and special provides examples of:

Alternative Title(s): A Wish For Wings That Work