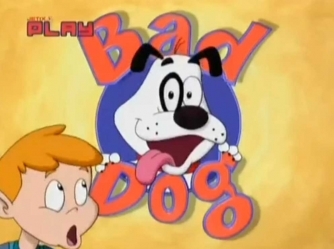 Proof that you can adapt anything into a cartoon series
Bad Dog!
—Said Once per Episode
Advertisement:

Bad Dog is a Canadian animated series from Montreal's CinéGroupe (with help from the American Saban Entertainment) made for Fox Kids and Teletoon. The show itself is, interestingly enough, based on a screensaver from the After Dark software.

The show followed the Potanski Family, composed of Psychologist Mother Madeline, Bungling Inventor Father Victor, nerdy older son with a multitude of allergies Trevor, Prima Donna daughter Penelope, elderly former astronaut grandfather, excitable toddler son Vic Jr., and their dog, Berkeley. Berkeley, the titular dog of the show, isn't a bad dog per se. Rather, he tries his hardest to be the best dog he can be. As a result, he seems to have a kind of obsessive need to obey every order he hears, including orders that weren't directed at him, or even things like suggestions, or even sarcastic comments. As a result, he tends to cause a lot of damage and chaos in everything he does. The end result is usually him being called a Bad Dog, which upsets him so badly that he goes completely catatonic until he's called a good dog.