A Dog Ate My Homework 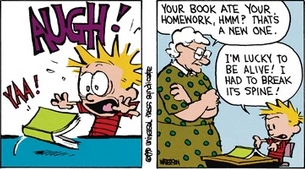 "I am telling you! A big, mean, homework eating dog attacked me and ate my report!"
— Numbah 5, Codename: Kids Next Door
Advertisement:

Basically, this is any child character explaining to his teacher why he hasn't done his homework. This will be either a lie, which may or may not be believed, or a Cassandra Truth. If it is the latter, expect them to also bring in the evidence proving their case (such as moist bits from homework, or even the animal itself). The most common variant involves a dog, but other animals can be used as well.

Though this has become a Dead Horse Trope, and children rarely use this excuse seriously, the second variation on this trope is in fact Truth in Television. Many dogs do have a thing for paper, or are just Extreme Omnivores.