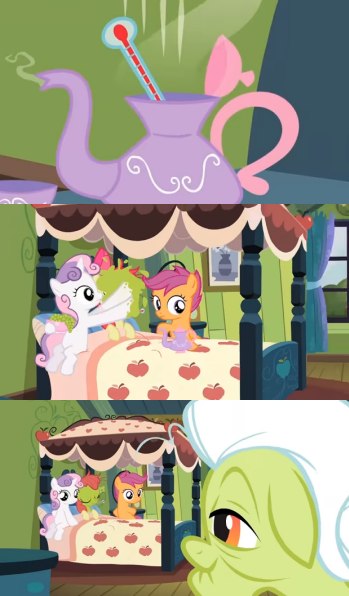 Sometimes in a fictional story, a character will pretend to be sick (otherwise known as malingering). Most often, this is to avoid something unpleasant at school or work, such as a test, visit from management, or similar inconvenience. Some just do it to get a day off, and some just want attention. This is often accompanied by completely overblown "symptoms", often exaggerated further by the character holding a thermometer up to a light bulb, lamp, flashlight or tea to fake a temperature.

In comedy, this almost never works, with the ruse either being readily discovered or backfiring on the character. A backfire might be whatever they were trying to avoid being moved to a day not covered by their ploy; it's also common for the character to end up missing out on something fun. Another risk is that the character may be compelled to take medicine (which is often Foul Medicine) or otherwise submit to medical treatment, as unpleasant and counterproductive as such things may be for someone who is not in fact sick.

In some cases, the character starts out as genuinely sick, but they become so pampered by the care they receive that when they recover, they pretend to still be sick just so they still receive the special treatment.

When we're talking about sex, normally it's when a married (or otherwise in a long-term relationship) couple doesn't have sex because he's in the mood (and it's almost always a man) but she is not (and it's almost always a woman). Not rarely, this will happen over and over again (because All Men Are Perverts and All Women Are Prudes), and it's also implicit (when not explicit) that she doesn't really love him/isn't attracted to him, or even that she's cheating on him. The woman usually feigns a headache, but any other disease will do. Sometimes, when she's really invested in the excuse, she'll pop up a pill (normally an aspirin, but any other appropriate drug will do) to "treat" her "disease", and will even start foreplay before suddenly dropping off with the headache excuse.

For added irony, it is rather common for someone who's playing sick to actually get sick somewhere along the way. This is often depicted as Laser-Guided Karma.

Doing this in the military, particularly during wartime can get you hauled before a Court Martial for the offense of Malingering. An even more serious version of this is Self Infliction of Wounds to avoid combat. Depending upon the circumstances, malingering can be construed as Misbehavior Toward the Enemy, which can be a capital offense.

Compare Do Well, But Not Perfect, Fake Faint, Hypochondria, Obfuscating Disability, Playing the Victim Card & You Don't Want to Catch This. Contrast Working Through the Cold and Feigning Healthiness. See also Faking Another Person's Illness. Can be a Grossout Fakeout if they fake some icky disease like a stomach bug. Will sometimes overlap with Skipping School if the character fakes illness to avoid a day or two of school.