Literature / The Worst Thing About My Sister 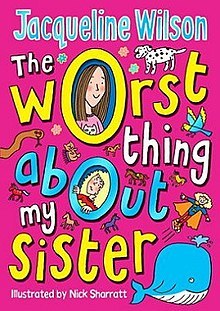 The Worst Thing About My Sister is a children's novel by Jacqueline Wilson.
Advertisement:

It is about a girl named Martina, or Marty for short, who defies all stereotypes of little girls: she's active, doesn't wear dresses, and hates things which are too saccharine. She has a rivalry with her sister Melissa who, unlike her, is very stereotypically feminine.

The drama begins when the girls' mother wants to convert Marty's room (which she calls her "Marty Den") into a sewing room, forcing the girls to share a room, but when Marty accidentally knocks Melissa out, she realises she actually loves her.

The Worst Thing About My Sister provides examples of