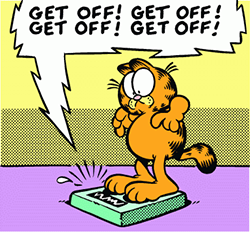 Apparently scales now come with self-preservation routines as DLC...who knew?
"Did you know humans frown on weight variances? If you want to upset a human, just tell them their weight variance is above or below the norm."
— GLaDOS, Portal 2
Advertisement:

Other times, it's easier (no matter how lame it is) to attack a person's insecurities. And it would be quite tough to find someone without a level of physical bodily issues or any insecurities thereof. So simply calling someone "fat" is usually enough to reduce them to tears, or at least get their attention, to perhaps make them double-check the mirror. Or the opposite can happen, and it causes the recipient of the insult to get angry and even carry out an act of physical violence against the insulter.

Usually used to show the pettiness of the insulter; if the person they criticize is in fact rather thin, it comes off as desperate, and if they are a bit overweight, it just seems cruel. The person's reaction to the insult can say something, too. Ignoring the insult or replying with something a great deal wittier just shows how unimpressed they are, while taking it to heart can show the insultee's vanity or lack-of-confidence. Compare I Am Big Boned, the response that negates the insult without denying the observation. And if the character is Fat and Proud, this becomes an Insult Backfire. Acrofatic characters are rarely on the receiving end of this (though they can use Self-Deprecation to invoke Fat and Proud or Large and in Charge).

When Bender inadvertently insults a hive of space bees by calling them a bunch of "fat jerks", he tries to save face by saying only one of them is fat. Unfortunately, it ends up being the queen.

Fatter Than a Cat

When Bender inadvertently insults a hive of space bees by calling them a bunch of "fat jerks", he tries to save face by saying only one of them is fat. Unfortunately, it ends up being the queen.

Fatter Than a Cat