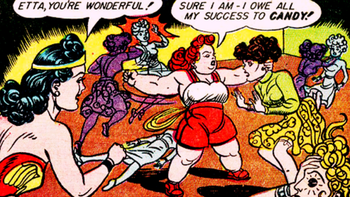 A girl with a stomach for sweets and action.
"Woo Woo!"
— Etta's signature Catchphrase

Etta is Diana's best friend and plucky sidekick in her many adventures. Generally, she is a tough, fun-loving, proudly heavyset lady who loves to eat candy (it's in her name, after all) and will always come to Wonder Woman's aid when needed.

The character has received numerous interpretations over the years. Pre-Crisis, she was a college student who led the Holliday Girls, a sorority devoted to Wonder Woman. Post-Crisis, she was married to Steve Trevor (and hyphenated her name to Etta Candy-Trevor) and is a snarky Air Force lieutenant colonel. Etta's current post-Flashpoint and Rebirth characterization is vastly rewritten, as a tough Black woman who works with Diana and Steve.

Etta has appeared in numerous media over the years, most notably the 1975 television series, where she was played by Beatrice Colen and the 2017 feature film where she was portrayed by Lucy Davis.

Etta Candy has appeared in: