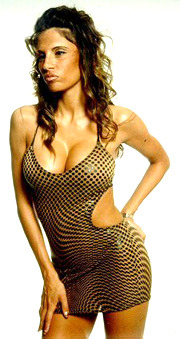 Francine Meeks (born Francine Fournier, February 19, 1972) is a retired Professional Wrestling valet/manager from Bear, Delaware best known for her work in the original ECW from 1995-2001 as Francine. Billed as "The Queen of Extreme", she was the most visible of ECW's valets, and quite possibly the first woman to be put through a table.

She debuted in Spring 1995 as an unnamed "fan" who was interested in Stevie Richards. This led to conflicts with Richards, his mentor Raven and his piece, Beulah McGillicutty. Francine then aligned herself with the Pitbulls, guiding #2 to the ECW World Television Title

in 1996. However, she turned heel on him, costing him the belt, and aligning herself with "The Franchise" Shane Douglas. This lasted until Douglas jumped to WCW in Summer 1999. Francine would second Tommy Dreamer for the next year, until she turned on him (again), forfeiting the ECW World Heavyweight Title

After ECW died, she would work in TNA and various independents, as well as making a surprise appearance at ECW One Night Stand 2005. WWE brought her in for WWECW in 2006, though she was gone by October. She retired in December to start a family.

"The Queen of Tropes":