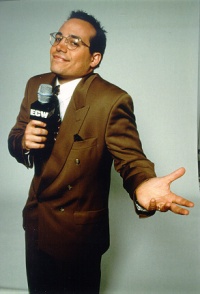 Joseph Carmine Bonsignore (born July 14, 1971), better known by his stage name Joey Styles, is best known as "the Voice of ECW". He was the first, the last, and the only play-by-play announcer in the wrestling business to call entire live pay-per-views solo (that is, without a color commentator to give him some breathing time and explain moves - "wasn't done before me, hasn't been done since!", in Joey's own words). Styles was well-loved by fans for his commentary skills and snarky attitude, and when ECW folded, it took a while, but he eventually signed with WWE and took up the play-by-play mic on Raw and later WWE's ECW brand. He was Kicked Upstairs in 2008 and served as the Director of Media Content for WWE.com before being released in mid-2016. He promptly signed on with Beyond Wrestling, CHIKARA, and EVOLVE, but was fired from all three promotions in November of that year over a very controversial remark made towards a female ring announcer during an EVOLVE event. He quietly left the business afterwards.

Joey is not related in any way, shape, or form to AJ Styles - though they are both phenomenal.