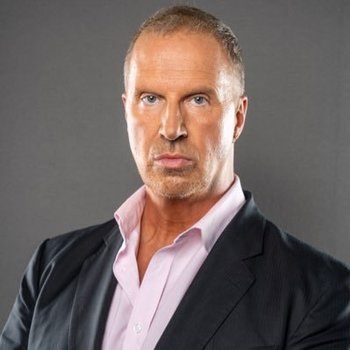 Donald Callis (born October 13, 1963) is a retired Canadian professional wrestler and manager best known for his time in WWE from 1997-1998 as The Jackyl and in ECW as Cyrus. He debuted in his native Winnipeg in 1989 as Don Casablancas and also competed around the world. He arrived in WWE in 1997 as the Jackyl, the new manager of the Truth Commission, replacing the Commandant. The group was mixed into the "Gang Wars" feud involving The Nation of Domination (led by Ron Simmons aka Faarooq), the Disciples of Apocalypse (led by Crush) and Los Boricuas (led by Savio Vega), until the Jackyl and the Interrogator (renamed Kurrgan) broke off on their own. He disappeared for a few months until he returned on the May 25th (taped May 19th) Raw as the leader of The Oddities. This lasted until the group was turned face and he was replaced by Sable. (See Chuck Cunningham Syndrome below.) As Cyrus in ECW, his role was as the face of TNN, who was supposedly trying to bury ECW and get them thrown off of the actual network. His last role was in TNA in 2003 as a "Management Consultant" who feuded with Director of Authority Erik Watts over control and went out of his way to make things difficult for Jerry Lynn. He left in 2004 and retired for a career in international trade. Near the start of 2017 he came out of retirement as a colour commentator for New Japan Pro-Wrestling, and then near the end of the same year he became an executive vice-president and colour commentator for the-now Impact Wrestling.

At the end of 2020, he began a cross-company run in All Elite Wrestling as Kenny Omega's manager after helping him win the AEW World Championship, with the goal of helping Omega win as many world title belts from as many promotions as possible, including his home promotion Impact Wrestling.

As for his in-ring achievements, he was a 5x WFWA (Winnipeg) Canadian Heavyweight Champion

Not to be confused with the band Jackyl, with Billy Ray Cyrus, with Cyrus the Virus from Con Air or with The Jackal.