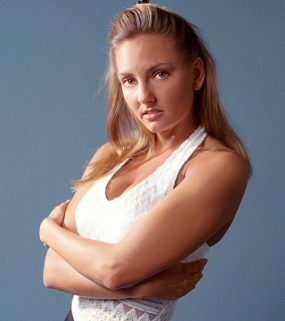 Trisa Laughlin (born Trisa Hayes, March 14, 1969) is a retired American Professional Wrestling valet, model and author from Muskegon, MI who worked in the original ECW from 1995-1998 as Beulah McGillicutty. She had briefly worked in Stampede in the late 1980s as Brian Pillman's "sister" Theresa. She spent some time posing for Penthouse and other adult magazines.

Beulah debuted at ECW Hostile City Showdown 95, with her character being the (formerly) fat girl from Raven and Tommy Dreamer's childhood. She sprayed Dreamer with hairspray, aligning herself with Raven, and thus providing the explanation as to why Raven hated Dreamer so much, as Dreamer had apparently been mean to her when they were all at summer camp as kids. Beulah would remain with Raven until ECW House Party 96, when she claimed that she was "pregnant" and that the "baby" was Tommy's, thus turning herself face. Beulah would stay a babyface for the rest of her time in ECW, which ended when The Dudley Boys gave her the 3-D. (See Dropped A Bridge On Her below.)

Here's another one for the books: Beulah was the 1st woman to do a moonsault, years before Lita and others.

Hayes retired and went back to college. She and Thomas "Tommy Dreamer" Laughlin are currently married with two little Mutants of their own.

Despite her ring name, she is in no way related to Joe "Michael McGillicutty"/"Curtis Axel" Hennig.