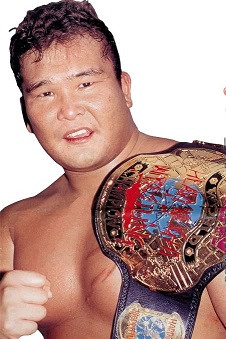 Masato Tanaka (born February 28, 1973) is a Japanese Professional Wrestler trained by Atsushi Onita and Tarzan Goto. Tanaka is best known for his work in FMW and, by extension, on-and-off in the U.S. in ECW from 1998-2000. He debuted in 1993 and quickly adapted to the promotion's hardcore style, getting Covered with Scars as a result. He made his U.S. debut with ECW in 1998 and quickly became very popular, as ECW brought his long-running feud with Mike Awesome (known in FMW as the Gladiator) to American audiences and great acclaim. He made his PPV debut with a win over Doug Furnas at ECW Living Dangerously 98. Following the demises of FMW and ECW, Tanaka would compete for New Japan Pro-Wrestling, the National Wrestling Alliance (particularly Pro Wrestling ZERO1), All Japan Pro Wrestling, Pro Wrestling NOAH, Dragon Gate, Fighting Opera HUSTLE, MLW, Ring of Honor, Jersey All Pro Wrestling and many other promotions in Japan and the U.S. and even had one last battle with Awesome at WWE's ECW One Night Stand PPV on June 12, 2005. Among his in-ring achievements, he is a former ECW World Heavyweight Champion, a former 2x ECW World Tag Team Champion

, and the inaugural NEVER Openweight Champion