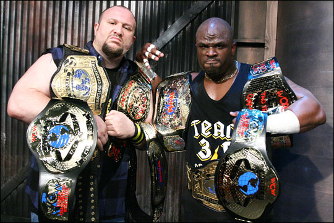 Thou shalt not fuck with the Dudleys.
Advertisement:

The Dudley Boys (also known as The Dudley Boyz or Team 3D) consist of storyline half-brothers Bubba Ray (originally spelled Buh Buh Ray to account for his stutter) and D-Von, occasionally Spike Dudley, and a whole heap of others in ECW. As one of the top tag teams in the histories of ECW, WWF/E, and TNA, Bubba Ray and D-Vonnote whose real names are Mark Pierre LoMonaco and Devon Hughes respectively are notable for becoming the most decorated tag team in professional wrestling history, as well as for their groundbreaking series of matches during the WWF Attitude Era against the Hardy Boys and Edge and Christian.

Originally the Dudley characters were conceived as a wrestling version of the Hansen Brothers from Slap Shot by Raven, with the storyline that they were all born to different mothers but to the same father, a traveling salesman known as Big Daddy Dudley. They were also billed from "Dudleyville", a makeshift community implied to have been formed in either a borough of New York City or the hills of Charleston, Pennsylvania.

After leaving for TNA in 2005, the Dudley name was reduced to unofficial name status due to WWE trademarking it, and the main three brothers were known as Brother/Bully Ray, Brother Devon (or simply just Devon), and Brother Runt (based on Spike's reputation of being "the runt of the litter" alongside his much larger kayfabe brothers), with their team name being Team 3D (taken from their finishing move). Still, they and other fellow ECW alumni did get away with calling Bubba and Spike by their original names due to familiarity.

Bubba Ray and Devon returned to WWE in 2015, until announcing their departure a year later in 2016 and returning to the independent circuit. Devon retired after their last match together at the December 2016 House of Hardcore event. Bully Ray embarked on a singles face run with Ring of Honor which was seemingly cut short when he retired in October 2017 following a concussion, though ended up unretiring in May 2018.

The Dudley Boyz were inducted into the WWE Hall of Fame in 2018.

and about Bubba Ray and Devon in particular here