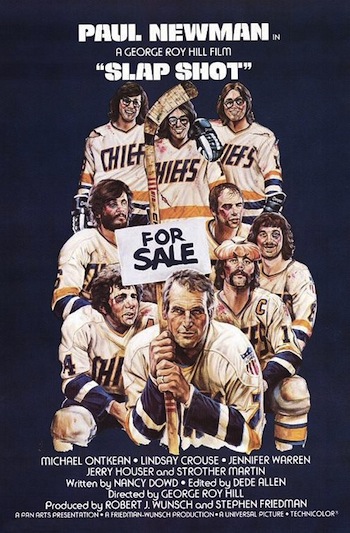 Dunlop: What are you guys doing?
Steve Hanson: Puttin' on the foil!
Jeff Hanson: Every game!
Jack Hanson: Yeah, you want some?
Advertisement:

Slap Shot is a 1977 sports comedy film starring Paul Newman, which has earned a sort of cult status among Ice Hockey fans; it has been named as the best hockey movie of all time by no less an authority than The Hockey News.

The Charlestown Chiefs are a minor league hockey team in the Federal League. With a losing record, a lack of popularity, and the fact that the town's steel mill — a main local job provider — is closing, the team seems doomed to be folded after the season. But then the team picks up the Hanson Brothers, three childlike young men who play the roughest hockey the team has ever seen (played by three real-life minor league hockey players). Reggie Dunlop (Newman), a veteran player and the Chiefs' coach, decides to retool the team around the brothers after their aggressive and violent play excites the fans. This decision splits the team between players who enjoy some good rough-housing on the ice, and those who prefer a "clean" style of playing. In a side plot, one of the "clean" players, Ned Braden, is on the verge of losing his wife due to her displeasure with their lifestyle.

Despite their slow rise in popularity, the team is still meant to be folded, and in order to keep his players' spirits up, Dunlop starts a rumor that the Chiefs have found a buyer somewhere in Florida. As the Chiefs continue winning and gaining fans, Dunlop blackmails the team's stingy GM, Joe McGrath (Strother Martin) to tell him who the team's mysteriously unknown owner is, in order to convince them not to fold the team.

The film was shot on location in and around Pittsburgh and Johnstown, Pennsylvania. The screenplay was written by Nancy Dowd, whose brother Ned played for the Johnstown Jets (of the now-defunct North American Hockey League), a team that included the guys who would play the Hanson Brothers in the movie. Ned himself appeared in the film, playing the notorious Ogie Oglethorpe. The director, George Roy Hill, also directed Newman in Butch Cassidy and the Sundance Kid and The Sting.